Choosing the right host for your webring is an important point that you should spend some time considering. In spite of the fact that all webrings are basically very similar, the systems that host these rings can differ greatly. First of all, we will define a webring host.
What is a Webring Host?

This is simply a web server that has a webring script (program) installed on it. The script controls all the ring functions such as adding, maintaining and deleting member sites and sending visitors around the ring.

Now this ring script can be on a web server that you control (or at least have access to), this is called a self-hosted ring system. Or it can be held on a third-party web server such as the Free Commercial Webring Systems at WebRing, RingSurf, SiteRing or ICQ Rings, these are called remotely-hosted ring systems. There are also many Free Independent Webring Systems operated by individuals (system managers) using either their own or an open source ring script. For example, a list of some of them that use the Ringlink script are available at the Ringlink Systems Directory.

Which way to go?

So the first question you may want to ask yourself is whether you want to use the services of a third-party ring host, or whether you want to be more independent and run your own self-hosted script. It all depends on your circumstances, if you have a domain name, a web hosting account and a spirit of adventure, then a self-hosted script could be the way to go. But most people don’t have those things (well maybe not the first two anyway!), and so they create their rings on one of the third-party systems.

Installing your own webring script on a web server offers unrivalled flexibility and independence. Some scripts have been released under an open source license so (if you’re keen enough), you can even tailor the script to suit your own requirements. But most ring scripts commonly available are well developed and offer enough features and customization options to keep most ringmasters happy, we will talk about them more in a minute.

One thing to think about before you install your own ring script is the commitment that it requires. More so than hosting your rings on a third-party ring host system like WebRing or RingSurf, etc, running a script on your own server needs dedication, a very long-term commitment in time and funding, and lastly but not least, a well-developed sense of humor and endless patience!

Along with this are a couple of other provisos. Ideally, you should have your own paid web hosting account and a domain name to go with it, this gives your ring system more credibility and it demonstrates to everyone that you have a real commitment to what you are doing (also allows you to easily move your webring system from one web host to another web host). These are by no means essential items, you can operate a ring scipt on a so called ‘free’ web hosting account, but due to those account’s nature of impermanence it creates total havoc with your rings when the company closes the free service on you or disables ‘sendmail’, or…. This is happening with more regularity on the web lately, the days of a ‘free’ lunch are just about over.

Lets explain some of your remotely-hosted webring options, the tables below shows the differences between the various webring hosting systems, as you can see there aren’t many, but some are more significant than others.

For example, the javascript generated navbar is only available with WebRing and RingMaker. With RingMaker the javascript can be turned off and HTML used as an alternative. With WebRing, both methods are available if the ringmaster chooses, or he/she may choose a preference. If you ever decide to give up or delete your ring, the WebRing system puts it up for adoption, where another ringmaster would assume control of your ring, whether you would like them to do so or not. The Rail only provides rings of their own called ‘Trains’ (you can not host a ring here, only join one of these 45 Trains).

Finally, the most important question you need to ask yourself is whether you want to host your ring/s on a large commercial webring system, self-host, or host on one of the many smaller independant webring systems? 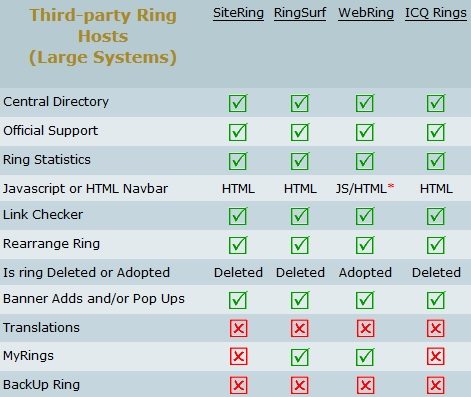 WebRing and RingMaker have a unique navbar system in that a ringmaster can choose whether the navbars are delivered to member sites by the use of javascript, standard HTML, or both. Both methods still involve member sites placing a piece of code on their webpage, they just work differently and there are pros and cons involved in each method.